The Birth of Ridley

As a first-time mum, I certainly wasn’t expecting to go into spontaneous labour when I was 38 weeks pregnant. Nor was I expecting it to happen on the morning a snap lockdown was called in Queensland. But I was prepared, I was ready and confident in myself and my body thanks to the Hypnobirthing training that had become second nature to me in the last few weeks.

And it was thanks to this training that I had the best birth experience I could have asked for. No, not everything went to ‘plan’, and yes, there were some dramatic moments – but because I was calm and relaxed, I was not fearful, and I felt empowered in my experience, I would not change a thing.

I was 38 weeks and 4 days when I woke up early to make my breakfast and hit my gym class at 8:30am. I’d lost what I suspected was my mucus plug 2 nights earlier, but being that it was my first time, I’d assumed it could still be days or weeks before I saw any action. At 7:30 however, I had an almighty discharge. At this point I was thinking “Nah, it must just be normal discharge, it’s not like my waters have broken” when really, it was my waters breaking (or at least the first indication of that).

So off to the gym I went, and one of my trainers joked about not having a baby on the gym floor (if only he knew!) and after the class I hit the showers to replace my pants that I had completely soaked through (again in denial that I was in early labour). I was meeting a friend for morning tea that day at 10, and sure enough as soon as we sat down I began to feel cramping in my lower back, so I accepted that I was in early labour. And we were shortly thereafter informed that Brisbane was entering a snap lockdown that afternoon- great! OF COURSE I was going into labour on this day of all days. So I ordered a nice big plate of crepes thinking it could be my last meal before I became a mother (it was!) and by the time I left to go home my back pains were becoming more frequent.

My Hypnobirthing training that I had been practicing daily with my husband for the last 2 months instantly kicked in, and I began alternating between surge breathing and relaxed breathing while focussing on relaxing my pelvis and jaw with every surge. In the 20 minutes it took me to drive home my surges had increased to 1 every 3 minutes, but I wasn’t scared; I was excited. My baby would be arriving today! I was expecting early labour to go forever, but this felt as if things were progressing quickly if my surges were this close together. My husband kept his cool as he furiously packed our half-prepared hospital bags, pram and my affirmation board in the car, and I relaxed on my knees, leaning into the couch with every surge I had (my exercise ball for labour hadn’t even been blown up yet).

Into the hospital we go…

Luckily the lockdown call had the roads nice and empty for our drive to the hospital, and before we knew it we were there. One of the perks of the Hypnobirthing was how centred and relaxed I felt – I carried my bags into the assessment centre and waited in the allocated waiting room until I had my examination. I continued to breathe, relax, and focus on my affirmations as the midwife checked me and let me know I was already 2cm dilated – I was definitely staying at the hospital as this point. My calm and focussed persona would trick the midwives also because I was relaxed even as I progressed, and they thought I wasn’t as far along as I was! 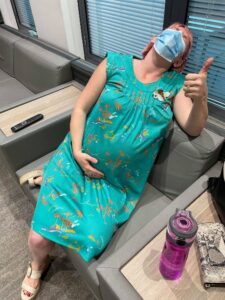 We get an unexpected surprise…

I experienced my first birth hurdle – my OBGYN wasn’t on call that day so another doctor would be delivering my baby. I could have freaked out at that point, but I stayed relaxed and eased into the new path my birth was taking. The new doctor had my birth preferences and knew I was aiming for a drug-free, possible pool birth, so I just focussed on my body and waited to be moved to a room to labour in.Shortly before my waters really ‘broke’ and I soaked the bed and floor! 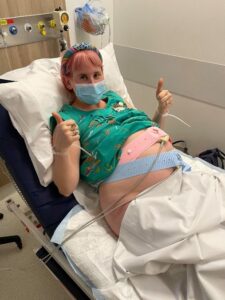 By the time I was taken up to a room to labour in, I was already 5cm dilated. I fully believe this was because I continued to relax my pelvis with every surge, willing my babe to move down and my body to open gently, smoothly and surely. I visualised my uterine muscles unwrapping around my baby like a ribbon while my cervix would bloom like a rose. I hopped in the shower and enjoyed the pain relief the warm water brought me while my husband played the rainbow relaxation meditation over the speaker. This played again on repeat for the rest of my labour, and I could drift in and out, focussing on the words when I wanted, and easily retreating into my meditative zone when I needed. My husband would squeeze my back and hips during surges at this point – and this felt like the best pain relief (I hadn’t even had time for a Panadol, things were going so fast!) 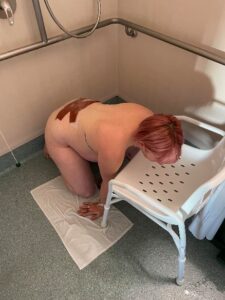 I faced another hurdle at this point – a birth pool would not be available for me today. I had entered labour knowing that a water birth wouldn’t be guaranteed, and as much as I was disappointed, I again leaned into this change of path and focussed on what was working for me, leaning on the back of a chair or the toilet and relaxing with each surge. The midwife was just popping her head in when I felt my body spasm like a ‘push’, and I grunted very loudly (involuntary I swear) and she very hastily ran to see if a birth suite was ready for me. I was wheeled to the suite and quickly hobbled over to the plain, little plastic chair in the corner. In was a strange choice but the only way I felt comfortable! It was just as well, because I pooped off the end of the chair during a surge!

I climbed onto the bed to have another exam (all vaginal exams were done with my permission, and I used surge breathing to help manage the feelings) and I was 7cm dilated, but I was getting the urge to push with each surge so I knew this would advance quickly. I was given gas & air just as the surges were becoming overwhelming, and as much as time was already skewed for me, this really blurred the concept of time for me. I was only using the gas for an hour and a half before the Dr said it was time to put down the gas and push.

It’s time to have a a baby…

I felt a renewed sense of energy and determination to meet my little babe, and I began to work and breathe with my body’s expulsion reflex. After a time of trying to push in the polar bear position, I wasn’t really feeling like I could engage and help her out, so I ended up on my back with my legs braced on the midwife and Dr. I didn’t think this position would work for me as this was my Dr’s suggestion, but as I began to push, I could feel her moving towards my opening! I kept my eyes closed throughout this stage of labour because I didn’t want to see how far I had to go before she would be here. I relied on my bodily sensations and trusted the people around me to encourage me until the end – my husband really felt like my partner and team member throughout the whole labour. As my baby’s head began to crown, the Dr would hold a warm compress on my perineum, which helped me to avoid tearing and relieve the sensation – I would say crowning was not painful at all! But this of course could be because I could see the light at the end of the tunnel, I could feel that my baby was almost here, and I gave little pants as my baby’s head popped out with an almighty gush of fluid.

I felt like I’d just won gold at the Olympics once her head was out. I felt on top of the world! I felt like her body would quickly follow, however suddenly everyone in the room was telling me to “wait wait wait”. My beautiful girl had her umbilical cord wrapped around her neck 3 times, and the Dr was trying to cut the cord from around her neck and free her. Her body came out quickly and she was whisked over to the resuss bay to receive oxygen. The midwife let us know the room would get very busy. Before long there were 20 people in the room. Working their hardest to bring my girl back from the brink of suffocation while the Dr looked after me. Me – I was fine! In that my body had tackled labour very well, and I hadn’t even grazed. I wholeheartedly believe this was due to the Hypnobirthing techniques that I had maintained throughout the whole labour.

My body was fine, and I was riding a total high of adrenalin. I was, however, still on edge waiting to hear my little girl’s first cries. It took 13 minutes to hear those (albeit weak) squeals. While I waited, I kept my calm breaths going and focussed on the Hypnobirthing relaxation to keep myself from losing it. Thank goodness my little darling only required CPAP oxygen, and she spent her first night in the NICU being monitored. But she was such a little fighter, she recovered very quickly and stole everyone’s hearts in the process!

So, there is my story – my water’s broke at 7:30am and my baby girl Ridley was born at 9:09pm. She is an absolute dream and we couldn’t be happier! 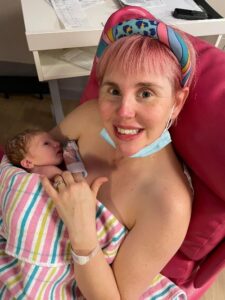